What is a dental filling restoration?

In order to avoid further damage to the affected tooth, the decay will need to be removed and sealed using an artificial tooth filling material. The filling material is subject to specific requirements. It should seal the given space very tightly, resemble the tooth color, hold as long as possible and should not react chemically.
Table of Contents
Why Choose Dr. Ghodsi? Composite Fillings Amalgam Fillings Ceramic Fillings
Gold Fillings
Frequently Asked Questions Before & After Photos Request Appointment

Dr. Ghodsi has the experience and credentials you should look for when considering a cosmetic dentist for tooth fillings and dental work.

Dr. Shayan Ghodsi offers his patients expert up-to-date knowledge and years of experience in the dental field, paying great attention to fine details when it comes to your individualized dental treatment. You will feel confident in being treated in a state-of-the-art dental facility. Dr. Ghodsi has a warm smile and gentle nature that will make your dental treatment a relaxing and comfortable experience.

Dr. Ghodsi received his Bachelor’s degree from Pace University in New York and earned his DMD at TUFTS University in Boston, Massachusetts in 2001. In addition, he has earned many continuing education credits in his fields of interest. 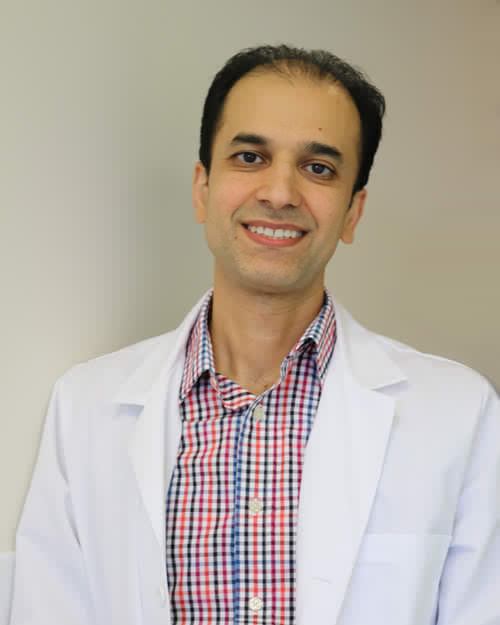 “Felt very comfortable, everyone was very pleasant and professional. The dentist was very approachable and honest. Did not push unnecessary procedures. I’m very grateful for his kindness and professionalism. I highly recommend him and his staff. Thank you so much.” 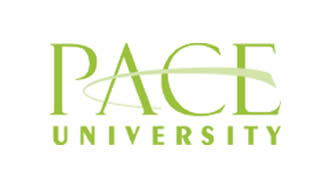 What types of dental fillings are there?

There are multiple options available. Some have lost popularity over the last few decades but that does not mean they are inferior. For example, gold fillings are rarely used these days but they are by far the most resilient, durable, and long-lasting types that will surpass any other modern material.

Each type of material has its advantages and disadvantages.

A temporary filling is meant to seal the tooth for a limited period of time, ranging from days to months. It can also be utilized in teeth which are expected to be removed in the foreseeable future. Because temporary fillings are less expensive to be placed, they are a very cost-effective way to handle certain dental conditions.

These fillings are plastic based restoration materials that come in a variety of shades that make them ideal for the front teeth. They have improved drastically over the years but like any material, they have their shortfalls. Many patients do not realize that there are certain limitations to this type of material, making them not suitable in certain situations. Composites usually have to be replaced after five to eight years. But they can also last as short as a few years or as long as a decade. In principle, a replacement is necessary when a filling has become brittle or unsightly.

Photo shows before and after tooth filling treatment with composite.

Amalgam restoration has been used for dental fillings since the 19th century. It is a mixture of silver, tin, copper, and mercury. Until early 2000, it was the most common filling material in the posterior teeth since it can withstand the high chewing pressure. Annually, about one billion amalgams are placed worldwide. It is still under debate if it is truly a health hazard. On one hand, it has been shown that a very small amount of mercury is released into the oral cavity. But on the other hand, if it has been so toxic, would there have not been a wide spread of health reports associated with amalgam? After all, it has been in use for over a century and it is still in use. It is and it will remain an ongoing debate. 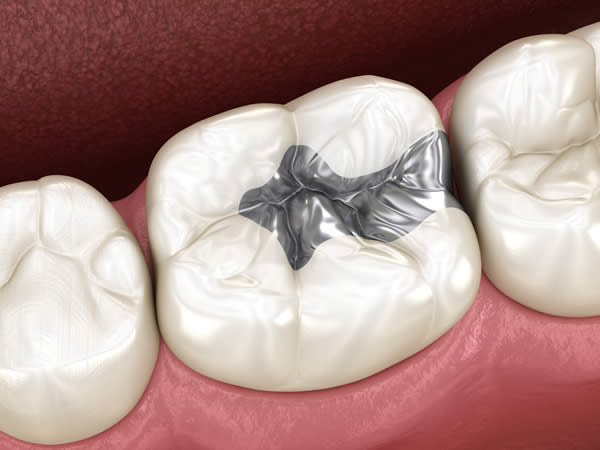 Ceramic fillings, also known as inlays, which are traditionally made of porcelain in the dental laboratory. An impression is taken of the preparation and a dental technician fabricates a matching porcelain filling which will be cemented by the dentist onto the tooth. Because inlays are fabricated indirectly and exposed to very high heat, the material becomes very dense and strong. 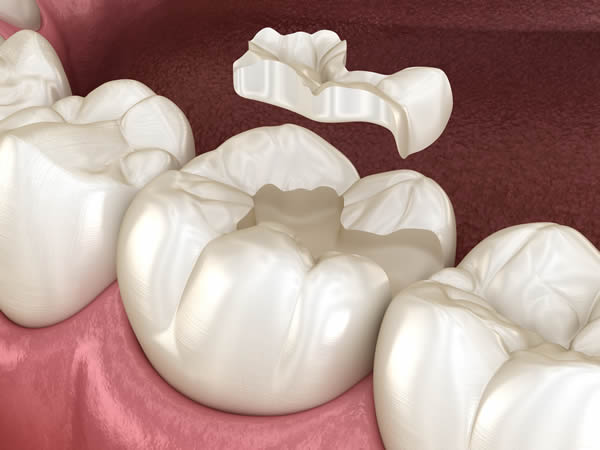 Illustration shows an example ceramic filling (inlay) being cemented onto the tooth.

The fabrication process is basically the same as ceramic except that a gold alloy is used instead. You could not use pure gold as it is too soft to withstand the biting forces. The higher the gold content the yellower the color. 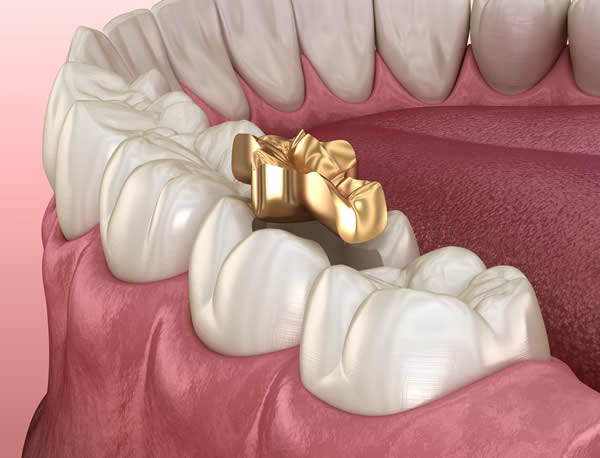 Illustration shows example of gold filling (inlay) being cemented into a tooth.

Tooth decay, also known as caries or cavities, is formed as a result of teeth being exposed to acid. A specific type of bacteria in your mouth converts sugars into acid which in turn will damage the teeth. What remains is an area of decalcified tooth structure, also known as decay. If you consume something acidic, such as carbonated water or soda, you bypass the bacteria and the acid damages the tooth directly. This is why soda is considered one of the worst caries forming drinks, It’s acidic and contains sugar!

Almost everything you eat does contain some form of sugar or starch. Always remember that it is the frequency that counts and not so much the quantity of consumed sugar. Drinking/eating an item over a period of time is by far more damaging than consuming it over a very short time period.

What is the best tooth filling material?

There is no such thing as best filling material. Every case is specific and needs to be evaluated. It depends on location, size, aesthetic expectation, caries index, retention capability, etc. Your dentist will be able to make those decisions for you.

For example, if a large portion of your tooth is missing, typically a composite is a much better choice as it has the ability to chemically bond to your tooth. As a result, it will be less likely to fall out.

If you need a filling in an area that is below the gum line where it is virtually impossible to visualize, isolate, and keep the saliva and blood away from the tooth, a composite filling will not bond properly and will fail much sooner. A silver filling would be practically your one and only permanent filling option as it is not sensitive to moisture.

If you still do not wish to have a silver filling, there are other materials that can be used but these are not considered long-term fillings which have a short lifespan.

Will I have pain or sensitivity after a filling is placed?

If a newly restored tooth hurts for several hours, this is usually no cause for concern. Most complaints resolve on the same day. Temperature sensitivities usually resolve within a few days.

If it is a deep filling the tooth can also become temperature sensitive and could potentially last for many months. These are typically short lasting annoying sensations rather than painful sensations. If you develop true dental pain, contact your dentist for further evaluation.

How long does a tooth filling last? And why is it called a permanent filling if it does not last forever?

A permanent filling refers to a filling that has a long service life. The terminology is meant to distinguish them from temporary fillings which are meant to last from a few weeks up to a year. Plastic fillings usually have to be replaced after five to eight years whereas silver fillings will last twice as long, if not longer.

Most patients misunderstand and believe their “permanent fillings” will last them a lifetime. Nothing in your mouth will last forever. Every single dental restoration will eventually need to be replaced. However, some materials last much longer than others. For example, inlays with high gold content are the most durable with a lifespan of up to fifteen years. The somewhat discredited amalgam begins to break down after about ten years but can last much longer.

What other factors determine the longevity of a filling?

The most important factors are:

Oral hygiene, diet, and maintenance
Amount of mastication forces being applied to the fillings
Material selection
How meticulous the fillings were placed by the dentist
The size of the filling (typically the larger the filling the shorter the lifespan)

Before & After Photos | Patient Cases Browse our work.
See patient cases with
Before & After Photos.

Your results may vary.